About 200 unhappy residents were at the meeting tonight with one message that was loud and clear: Stick to the OCP!

Densification provides residents with no benefits, nor does White Rock benefit. It is all about developers making false claims (and there were too many to mention tonight!), and making a dollar while they can.

White Rock is already the 5th most densely populated city in BC, but are taxes remain sky high, our schools are over crowded, wait times at the hospital emergency ward are out of control, our roads are congested, and our policing and fire fighting bills are climbing. All this gets worse as we strive to build up density. What is in it for residents? Nothing.

So why do this White Rock? This land is zoned for Utilities. It is not supposed to have any residential lots on it at all. It was donated by the Goggs family for use as an aquifer. Why rezone it just so EPCOR can sell it off and make $12M? Turn this request down, and White Rock will own this 2.7 acre parcel of land when we purchase the Water Utility from EPCOR later this year.

Why would our Mayor and City Councillors choose any other option than to turn down this rezoning request, and reap a huge benefit for the city of acquiring this land along with the rest of the utility when it buys it?

Email your comments to Chris McBeath of the city planning department at CMcbeath@WhiteRockCity.ca. He would like to receive all comments from the public by this Friday is possible. 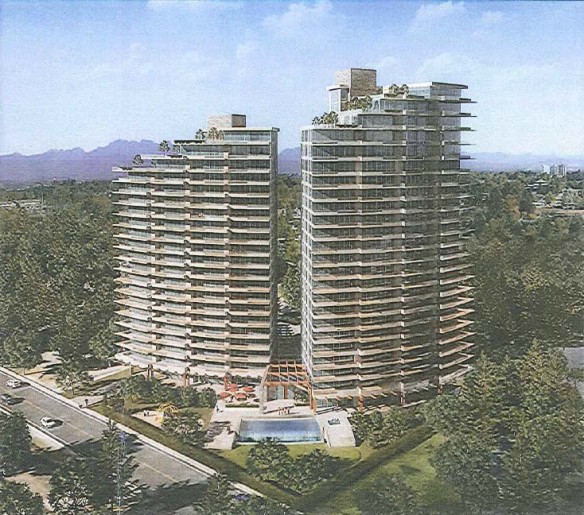 Public Meeting on the proposed Twin Towers at 1454 Oxford Street on the EPCOR lands is happening tonight April 9th starting at 5:30pm at First United Church. This is an information session only. Residents and the public will not have an opportunity to speak.

Will the City be “conflicted” in its handling of the approval process for the EPCOR? Will the developer propose something extreme, so we are happy to have our City by the Sea ruined by something smaller later? Should White Rock just say NO so it could buy this land off EPCOR cheap with the rest of the Water Works? Are the answers to all of these questions all YES?!

Here is one for the “only in White Rock” list.

EPCOR the $2 Billion a year utility owned by the City of Edmonton (and the owner of the White Rock water system) has agreed to a deal whereby if their property on Oxford Hill can be rezoned to accommodate two commercial condo towers they will be willing to sell their property. The two towers (21 and 24 storeys) would be constructed on the western portion of the EPCOR land. If approved the rezoning would obviously be a huge cash windfall for EPCOR.

Personally I can’t imagine how any of the White Rock councillors would even consider or vote on this proposal as every one of them is in a position of ethical conflict given that the city is currently in negotiations to acquire EPCOR’s water utility operations in White Rock. In my opinion that fact alone creates an ethical conflict of interest. How can you be negotiating to acquire a company and at the same time consider a very significant rezoning application from the same company that will result in EPCOR reaping windfall profits? Could this be some kind of a side deal that greases the wheels of the negotiations?

Read the rest of this story in the White Rock Sun:
http://whiterocksun.com/index.php?mode=letters

Public Information Meeting for the proposed development of two 21 and 24 story high rise towers, high density development at 1454 Oxford Street (EPCOR Land) Wednesday, April 9th from 5:30 PM to 7:30 PM in the United Church at 15385 Semiahmoo Avenue in White Rock. Be there!

Why would White Rock City Hall permit OCP Changes on the EPCOR Land to allow these two towers to be built?
By sticking to the OCP, this land is far less valuable and White Rock will be able to buy it back from EPCOR along with our Water Works at a very reasonable price and be able to maintain it as a park, or develop it later as the city sees fit. To allow these OCP now changes makes no sense.

Why were the Development Notice signs hidden behind bushes?

Is the City “conflicted” in its handling of the approval process for the EPCOR land developers due to the City’s “closed door” negotiations with EPCOR? We all know that the $12,000,000 price tag for 2.67 acres of what for years has been utility land, and as such zoned as “civic/institutional”, would be a “windfall” for EPCOR that only happens if the City provides the necessary approvals. It is not a big stretch to wonder whether this in fact will somehow form a key plank of the City’s EPCOR acquisition negotiating strategy. If this is the case, we will say now that that would be both wholly wrong and inappropriate.

Why would City Council approve this now? The purchase of our water utility from EPCOR is mandated by the regulator and stipulates that we are permitted to buy it. There is no need to give EPCOR this windfall. By keeping the zoning as specified in the OCP, we keep the value of this land low and the city can acquire it cheap from EPCOR. By permitting this change to the OCP, resident’s needs are ignored and EPCOR benefits. Why would the City Council approve this? Do they have something to gain from this that we did not hear about in the closed door sessions? Let’s hope not! That would be a huge conflict of interest. Surely City Council has not forgotten that they serve residents, and not developers?!

Residents invest their money in their homes, expecting the OCP will protect their investment. Every time city council allows an exception for another Tower or Monster home, their our violating the trust expected of local governments to serve residents and protect their investments and their community. Our schools, roads, and hospitals are already bursting at the seems, and our Policing and Fire Fighting costs keep going up as we add more density. This has got to stop before we become another Whalley or Newton or Richmond. Our little city by the Sea should not be For-Sale to the highest bidder. We need growth and development, but it needs to be sustainable and well planned.

Public Information Meeting for the proposed development of two 21 and 24 story high rise towers, high density development at 1454 Oxford Street (EPCOR Land) Wednesday, April 9th from 5:30 PM to 7:30 PM in the United Church at 15385 Semiahmoo Avenue in White Rock. Be there!